Rob Roy Hillclimb is one of those historic grass-roots motoring events I love to attend. It is the relaxed and laid back atmosphere that makes this event uniquely special.

There is something magic about this place. Hidden away in the Christmas Hills, Rob Roy is the venue of the first Victorian and Australian Hillclimb Championships in 1938.

A range of vintage and modern machinery was welcome at this event, organsed by the MG club of Victoria.

As expected, MG was the most dominant marque amongst a diverse field of Ford, Renault, Triumph, Elfins, Toyotas and many more. This Supercharged MG ZS laid down some very quick times.

This club challenge is held over 3 events and a trophy is awarded to the club which accumulates the most points.

When we arrived I was awe-struck by the presence of this Renault Alpine.

A proper car used in the correct way.

The Alpine’s first run on a damp track was 30.46. As the day progressed track conditions improved allowing times to reduce. The Renault’s second attempt was a rapid 28.93.

It was also great to see many modern Renaults competing for the trophy. 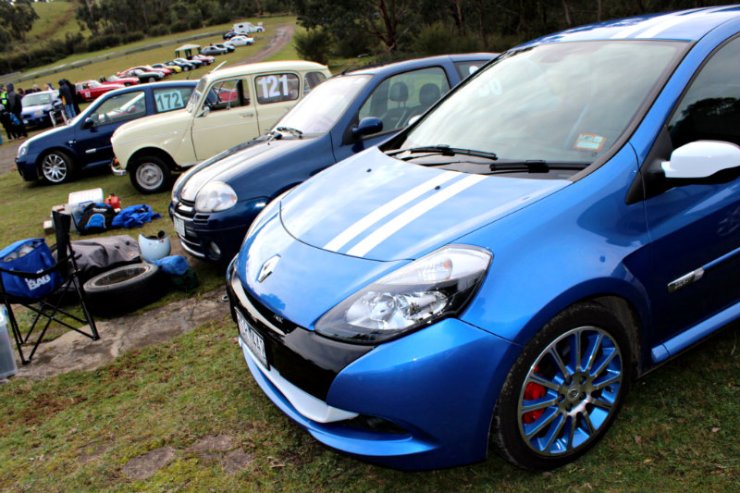 Its quickest time that we saw was a 28.01. I’m sure it would have been quicker as the day progressed.

Another eye-catching vehicle participating was this 1997cc Fiat 124 Spider.

The bodywork and attention to detail was immaculate.

This turboed Datsun 1600 looked great on the track.

Interestingly, with lightweight bodies many of the vintage cars were considerably quicker up the hill than more modern cars. No doubt its driver skill and experience plays an important part as well. This Ford racer managed a very respectable 30.16 on its first run.

This beautiful MG TC was enthusiastically driven by father and 14 year old son. Yes, you can get your Cams license when you’re 14!

I just love this V8 Ford Roadster. We previously took some happy snaps of it at Historic Winton in May. Its first attempt was a 32.90.

Nil Driver Protection in this Redpath Oldsmobile. A very rapid 27.83 was recorded. Serious commitment involved driving this bit of kit.

The colour of this Monaro was amusingly described by commentator Don Kinsey as being “Werribee tan.”

This Smart was hovering around the low 30’s in times. Not bad for a tiny city car. I can’t say I have ever seen one before used in this way.

The only Volvo present. It wasn’t lightening quick but atleast it put on a show.

I’ve got a real thing for these Alfa’s- particularly when they are this well prepared.

Love the detail on the racing wheel.

This Honda S600 was a rugged little racer.

Considering its tiny engine capacity it put down a very quick 30.96 early on in the day.

With a very similar capacity this tiny Suzuki Cappuccino frothed (as the commentator said) down the track in the low 30’s.

This Elfin Clubman was fairly consistent around the 27 seconds to reach the top of the hill.

Many of the open-wheelers seemed to struggle for grip.

This AA Special F/Libre on its second run put down a 31.11. I’m sure it would have been quicker later on.

Only at Rob Roy can you see an old Toyota Corolla competing to be fastest up a hill.

I can’t wait to cover “Classic Japan” car show later on this year.

This underrated and unassuming Laser was a definite surprise. It put down a very rapid 27.73.

On our way to leave we spotted a few interesting cars in the spectator car park. We just couldn’t resist the photo opportunities.

Well that’s it from us! If you enjoyed our coverage, please share this article and like us on Facebook. We are looking forward to bringing you coverage from future events from Rob Roy. Congrats to the MG Car Club of Victoria for organising a relaxed and professionally run day out at Rob Roy.